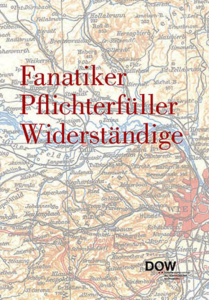 The yearbook consists of the DÖW annual report for 2015 and 11 articles with the main focus on Nazi persecution and resistance in the “Reichsgaue” Greater Vienna (“Groß-Wien”) and Lower Austria which the Nazis called “Niederdonau” (to avoid the tabooed term Austria/Österreich).

Examples for Nazi fanatism are described in three essays:

“Sixteen Poles at once”
The contribution of the teacher Rudolf Riha tries to clarify rumors about war crimes committed by an Austrian police man, member of the 11th SS-­Totenkopfstandarte displaced in the Radom district of the General Government, who, after 1945, became mayor of a village in Lower Austria. During the last years the municipal council of the village refused all attempts to rename a street which was named after this mayor.

From “Aktion T4” to the so called “decentralized euthanasia”
The psychiatric hospitals Gugging, Mauer-Öhling and Ybbs in Lower Austria were among the main sites of euthanasia murders after the Aktion T4 had been stopped by Hitler in summer 1941. The principal perpetrator on all these crime scenes was Emil Gelny, one of the “most evil figures of Austrian medical history”, as Herwig Czech calls him. Czech evaluates both medical records of the hospitals during the Nazi era and post-1945 court documents. He depicts Gelny as an example for a Nazi fanatic who exceeded even the requirements of the euthanasia murder program.

The “Stein Complex”
The young historian Konstantin Ferihumer and DÖW archivist Winfried Garscha describe the biggest massacre on Austrian soil in 1945, the mass shooting of more than 300 already released prisoners of the penitentiary Stein on the Danube on April 6th. The authors argue that the massacre was part and parcel of a whole complex of crimes of the final phase of the Nazi regime in the area Krems on the Danube. Krems and Stein had become headquarters of some of the crucial Nazi state apparatuses like the Gestapo or the general prosecutor after the liberation of Vienna by the Soviet army.

Claudia Kuretsidis-Haider presents her expert opinion about the possiblde revocation of the honorary citizenship for the former and deputy mayor of the Lower Austrian town of Amstetten. She describes the involvement of this “Landrat” (district administrator during the Nazi era) in the persecution of Jews, “gypsies” and slave laborers, and his career after the war:
“Metes and Bounds of Obedience, Administrative Jurisdiction and Local Networks of a District Administrator During and After World War II”

Stephan Roth tells the moving story of a local resistance group in the “Dunkelstein Woods” in Central Lower Austria: “…because I will be shot dead today afternoon at five.”
Hans Schafranek shows the startling extent of the infiltration of different resistance organizations in Lower Austria by the Gestapo office in Sankt Pölten, especially in the final phase of the war.

In  November 2016 the DÖW was awarded by the governer of Lower Austria for this book.

All contributions are in German. The book is out of print, however you can DOWNLOAD it from DÖW web-site.