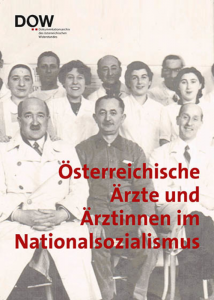 This publication examines the effects of National Socialism on Austrian medicine, with the focus being on the large group of persecuted – mostly Jewish – men and women doctors. It is an updated compilation of lectures given at a conference at the Medical University of Vienna on April 16, 2015, co-organized by the Medical Univertsity, the Documentation Center of Austrian Resistance (DÖW) and the Natural History Museum Vienna. The conference had been sponsored by the Center for Medicine after the Holocaust (Houston, TX).

The DÖW yearbook 2017 comprises work done during 2016 by the Documentation Center of Austrian Resistance. Compiled by Christine Schindler under the title Ein lebendiger Ort der Erinnerung (“A vibrant place of remembrance”).

ORDER
Members of the American Friends of the Documentation Center of Austrian Resistance can get the yearbook at a reduced price. Contact: DWWildermuth@ship.edu