This year’s Radomir Luza Price for an outstanding work in the field of Austrian and/or Czechoslovak World War II studies, particularly in the fields of diplomatic history, resistance and war studies was awarded during the forty-second annual conference of the German Studies Association (GSA) in Pittsburgh, Pennsylvania, September 2018. It was the second time that the awarding of the prize took place in the course of the Association’s banquet on Friday evening, 28 September 2018. In previous years the awarding of the Radomir Luza Prize had been part of the “Austrian Reception”, given by the director of  the Austrian Cultural Forum New York during the annual GSA conference; the prize itself had been provided by the Center Austria: The Austrian Marshall Plan Center for European Studies at the University of New Orleans (Radomír Luža had been professor for European and German history in New Orleans, from 1967 through 1993, at Tulane University).
Since 2017 the American Friends of the Documentation Center of Austrian Resistance have been able to double the annual prize money. This was made possible by a generous grant by the Future Fund of the Republic of Austria. With the help of Gerald Fetz (Secretary-Treasurer of the GSA), the Luza Prize has been moved to the German Studies Association, which is taking care for the assessment of the granted money.
Because the prize winner of this year could not show up personally, the formal  presentation of the prize by representatives of the American Friends of the DÖW was replaced by an announcement during the banquet. The GSA representative, who moderated the banquet, payed tribute to the organizers of the prize read a summary of the statement of the jury:

Gerlach’s study about the expulsion of the “Sudeten Germans” from Czechoslovakia after the World War II deals with a still controversial chapter of modern Central European history. An independent academic view from British or American researchers was missing. David W. Gerlach’s book is filling this gap. Offering a unique contribution to the growing literature on ethnic violence, it explains the situation in border regions in valuable case studies and examines the “ethnic cleansing” in Czechoslovakia in a wider Central European framework. We learn that “ethnic cleansing was not only about ethnicity.”  Also “migration and property transfers” propelled the ethnic transformation of the Sudetenland. Gerlach reveals how Czechs struggled amongst themselves over property and administrative control, as most designated as Germans underwent expulsion. Gerlach also explores how ethnic cleansing ended, how one of the most highly industrialized regions in Europe floundered and, finally, how the scars of the expulsion resonate up until today. 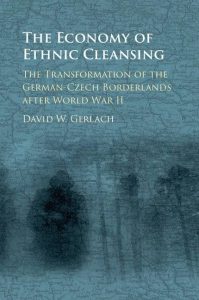