Up to 2016 the awarding ceremony took place in the course of the “Austrian Reception”, given by the director of director of the Austrian Cultural Forum New York, during the German Studies Association’s annual conference. This year it was, for the time, part of the Association’s banquet on Friday evening.

Winfried Garscha, as representative of the “American Friends of the Documentation Center of Austrian Resistance”, quoted from the reason of the jury:

Hochman’s Imagining Greater Germany is in perfect alignment with Radomír Luža’s classic Austro-German Relations in the Anschluss Era, in fact, her book represents a sort of prequel to Luža’s book. It is a serious work of comparative history on the important question of who supported “democracy” in Weimar Germany and the First Austrian Republic? Her focus on “cross-border” contacts of Germany’s and Austria’s “entangled” interwar histories of the “Pro-Anschluss” movements on both sides of the border is an innovative new approach on Austro-German relations. Her chapter on “symbols” of the new democratic republics (flags, anthems, state holidays) adds a lot of new information on the domestic contestations of these symbols. This is a well-written, deeply researched history that will honor this first Luza Prize to be administered by the GSA.

Hochman is the fifth recipient of the Luža Prize, started in 2012.

Günter Bischof, representative of the Center Austria, which had financed the prize until 2016, gave a short outline of the history of the prize and of his name-giver Radomír Luža. The American Friends of the Dokumentationsarchiv des österreichischen Widerstandes (Winfried Garscha, David Wildermuth) and the Center Austria: The Austrian Marshall Plan Center for European Studies at the University of New Orleans (Günter Bischof) have originated and organized the annual Radomir Luza Price in Central European Studies of the World War II Era. With a grant from the Austrian Future Fund (Zukunftsfonds der Republik Österreich) and with the help of Gerald Fetz (Secretary-Treasurer of the GSA), the Luža Prize has been moved to the German Studies Association and will be awarded annually during the GSA Banquet.

Czech-born Radomír Luža fought with his father in the Czech resistance against the Nazis and fled the country after the Communist takeover in February 1948. He emigrated via Vienna to the United States. After receiving a PhD in History from New York University, he began his prolific career at the University of New Orleans and switched to Tulane University in New Orleans, where he served as an eminent professor of Central European History until his retirement. He wrote books both on Austria and Czechoslovakia during World War II. His memoir The Hitler Kiss is a classic on the Czech resistance. 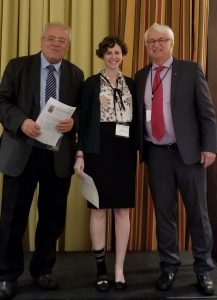 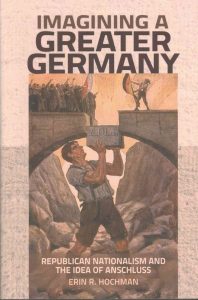 The American Friends of the Documentation Center of Austrian Resistance annual meeting takes place directly before the Austrian Cultural Forum New York reception in the same room, which is always a great opportunity to greet the larger Austrian academic community.

I would also like to remind those members who have yet to pay their 2016-2017 American Friends dues that they can do so at our annual meeting.  Of course, members may also simply send their dues to me at the address listed below.

All the officers of the American Friends of the Documentation Center of Austrian Resistance look forward to seeing you at our annual meeting.

Research regarding the various aspects of the Holocaust is one of the central activities of the Documentation Center of Austrian Resistance (DÖW): On the one hand, in the area of exile research; on the other hand, the research project “Register of Names of Austrian Victims of the Holocaust”, undertaken from 1992 to 2001. Beginning in 2010 the DÖW began the project, “Expulsion—Exile—Emigration. Austrian Exiles As Seen in the Files of the Law Firm of Dr. Hugo Ebner,” using a portion of the pension documents acquired from the law firm of Dr. Hugo Ebner in 2006; as well as the “emigration lists” of the Vienna Israelite Community (IKG).

Despite the numerous studies of partial aspects of the expulsion, persecution, and murder of Austrian Jewish men and women, a comprehensive analysis of how the different victim groups related to each other economically and socially, or in terms of age and sex, for example, was lacking. The project “Expulsion and Extermination. New quantitative and qualitative Research Regarding Exile and Holocaust” investigated questions regarding the network of social relationships; the history of expulsion and extermination; and the subsequent fate of this largest group of Nazi victims, who were also at greatest risk of extermination. The results are a social and structural analysis and a collective biographical synthesis.

The American Friends of the Documentation Center of Austrian Resistance/Vienna, supported by Center Austria: The Marshall Plan Center for European Studies at the University of New Orleans, are pleased to announce the Fifth annual prize namend after Radomír Luža for an outstanding work in the field of Austrian and/or Czechoslovak World War II studies, particularly in the fields of diplomatic history, resistance and war studies.  This prize carries a cash award and seeks to encourage research in the above mentioned fields focusing on the time period between the Anschluss and Munich Agreement (1938) and the end of the Second World War (1945) and its immediate aftermath in Central Europe.

To be eligible for the 2017 Radomir Luza Prize competition, the book or dissertation must have been published (or a dissertation defended) between January 1, 2016 and December 31, 2016.  Authors must be citizens or resident aliens (holders of “green cards”) of the United States or Canada.  Dissertations must have been awarded by a North American University.  The language of the work must be English.

To be considered for the Radomir Luza Prize competition, please send a copy of your work electronically to: DWWildermuth@ship.edu.

The deadline for submissions has been extended to August 30, 2017.  The winner will be announced at the GSA conference in Atlanta, GA, October 5-8, 2017. The awarding will take place during the banquet of the GSA at Sheraton Atlanta Hotel / Capitol Center South, on Friday evening.

Memento Wien is an online tool, optimised for devices such as tablets and smartphones, that offers information about the victims of the Nazi regime in the centre of Vienna. Using a map of the city, the mobile website makes visible the last-known addresses of those murdered as well as archival documents and photographs of people and buildings in the city. Users have the opportunity to interact with the history of their surroundings and learn more about the fate of the people who were persecuted.

The DÖW was awarded the Science Awards of Lower Austria at the Wissenschaftsgala on October 13, 2016 in Grafenegg. 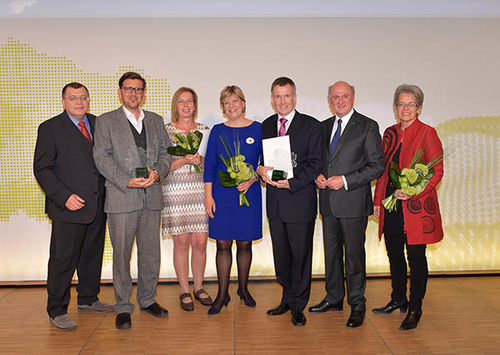 more info in German on the Website of the DÖW